IoT from an Attacker’s Perspective 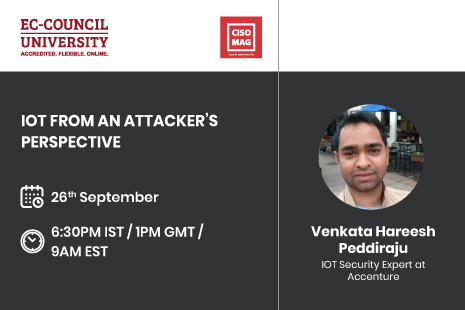 Speaker Bio: Venkata Hareesh Peddiraju is an Information Security enthusiast who is an avid security researcher. Venkat has worked extensively in carrying out Penetration Tests on Web Applications, Mobile Applications, Web Services and IT Infrastructure. For over a year now, he has been carrying out PenTests and researches on IoT solutions. Source Code Analysis, Firmware analysis, Binary analysis have been the run-of-the-mill…

Topic Abstract: IoT has gotten a lot of traction lately and has found it’s applications widely in areas such as Home Automation, Healthcare, Automobiles and Industrial applications. This has opened up a substantial amount of attack surface when seen from an Attacker’s perspective. For instance, Home Automation sector has grown significantly to this point of time, where almost every device / appliance in our homes can now be SMART. When a device gets “Smart”, it connects to a home network and in turn to the Internet; which enables the consumers to interact with such devices from any part of the world. As convenient as this may sound, this makes Every Connected Device in our home a Potential Entry Point. Even compromising a single IoT device could let the attacker into the home network and control other devices connected to the same network.

This talk is devised to showcase the increase in attack surface with the introduction of IoT as well as various attack scenarios through which an IoT device could be compromised by an attacker.